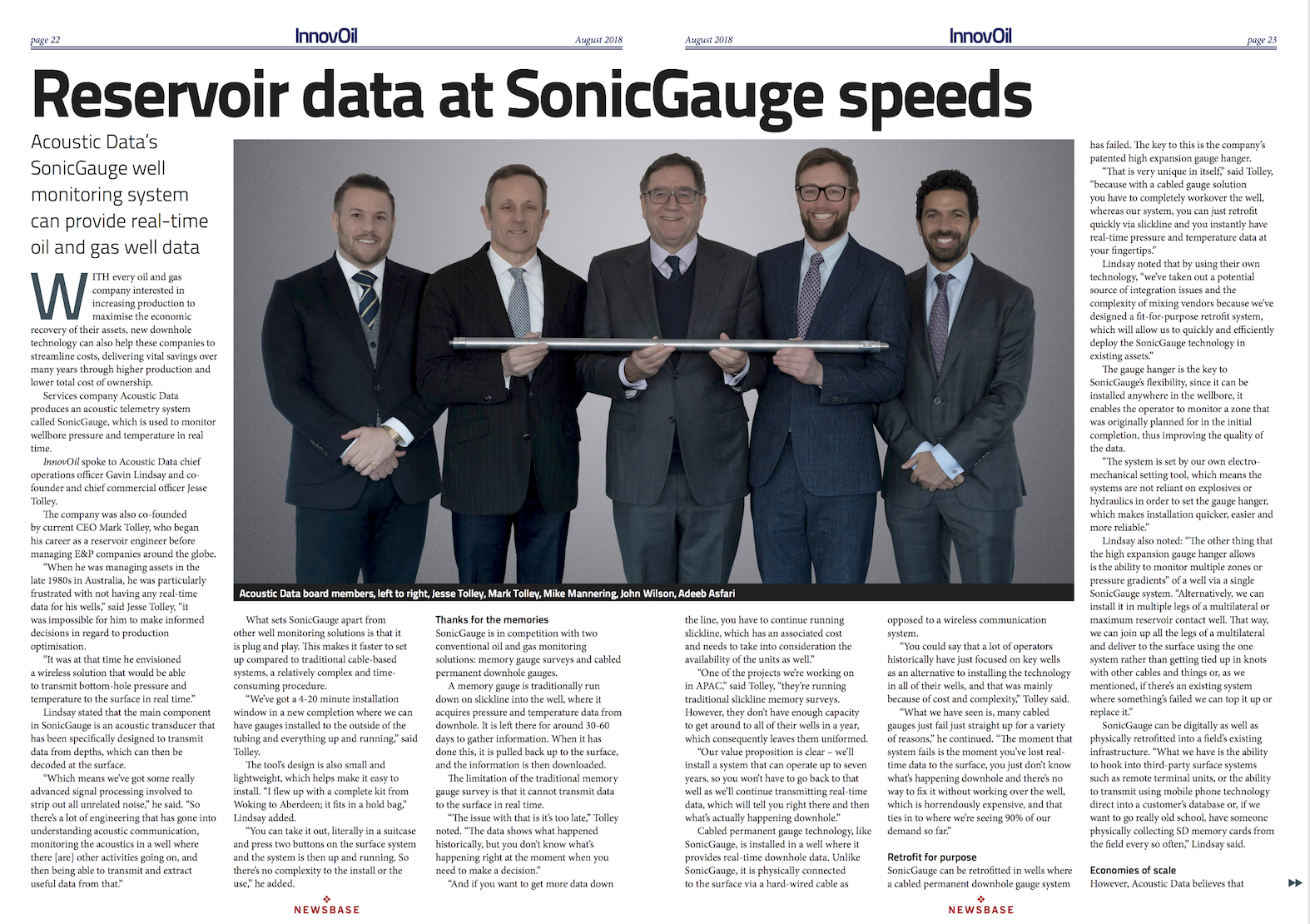 With every oil and gas company interested in increasing production to maximise the economic recovery of their assets, new downhole technology can also help these companies to streamline costs, delivering vital savings and revenue over many years through higher production and lower total cost of ownership.

The company was also co-founded by current CEO Mark Tolley, who began his career as a reservoir engineer before managing E&P companies around the globe.

“When he was managing assets in the late 1980s in Australia, he was particularly frustrated with not having any real-time data for his wells,” said Jesse Tolley, “it was impossible for him to make informed decisions in regard to production optimisation.

“It was at that time he envisioned a wireless solution that would be able to transmit bottom-hole pressure and temperature to the surface in real time.”

Lindsay stated that the main component in SonicGauge is an acoustic transducer that has been specifically designed to transmit data from depths, which can then be decoded at the surface.

“Which means we’ve got some really advanced signal processing involved to strip out all unrelated noise,” he said. “So there’s a lot of engineering that has gone into understanding acoustic communication, monitoring the acoustics in a well where there [are] other activities going on, and then being able to transmit and extract useful data from that.”

What sets SonicGauge apart from other well monitoring solutions is that it is plug and play. This makes it faster to set up compared to traditional cable-based systems, a relatively complex and time-consuming procedure. “We’ve got a 4-20 minute installation window in a new completion where we can have gauges installed to the outside of the tubing and everything up and running,” said Tolley.

The tool’s design is also small and lightweight, which helps make it easy to install. “I flew up with a complete kit from Woking to Aberdeen; it fits in a hold bag,” Lindsay added.

“You can take it out, literally in a suitcase and press two buttons on the surface decoder and the system is then up and running. So there’s no complexity to the install or the use,” he added.

Thanks for the Memories

A memory gauge is traditionally run down on slickline into the well, where it acquires bottom-hole pressure and temperature data. It is left there for around 30-60 days to gather information. When it has done this, it is pulled back up to the surface, and the information is then downloaded.

The limitation of the traditional memory gauge survey is that it cannot transmit data to the surface in real time.

“The issue with that is it’s too late,” Tolley noted. “The data shows what happened historically, but you don’t know what’s happening right at the moment when you need to make a decision.”

“And if you want to get more data down the line, you have to continue running slickline, which has an associated cost and needs to take into consideration the availability of the units as well.”

“One of the projects we’re working on in APAC,” said Tolley, “they’re running traditional slickline P/T surveys. However, they don’t have enough capacity to get around to all of their wells in a year, which consequently leaves them uniformed.

“Our value proposition is clear – we’ll install a system that can operate up to seven years, so you won’t have to go back to that well as we’ll continue transmitting real-time data to your desktop, which will tell you right there and then what’s actually happening downhole.”

Cabled permanent gauge technology, like SonicGauge, is installed in a well where it provides real-time downhole data. Unlike SonicGauge, it is physically connected to the surface via a hard-wired cable as opposed to a wireless communication system.

“You could say that a lot of operators historically have just focused on key wells as an alternative to installing the technology in all of their wells, and that was mainly because of cost and complexity,” Tolley said.

“What we have seen is, many cabled gauges just fail straight up for a variety of reasons,” he continued. “The moment that system fails is the moment you’ve lost real-time data to the surface, you just don’t know what’s happening downhole and there’s no way to fix it without working over the well, which is horrendously expensive, and that ties in to where we’re seeing 90% of our demand so far.”

SonicGauge can be retrofitted in wells where a cabled permanent downhole gauge system has failed. The key to this is the company’s patented high expansion gauge hanger.

“That is very unique in itself,” said Tolley, “because with a cabled gauge solution you have to completely workover the well, whereas our system, you can just retrofit quickly via slickline and you instantly have real-time pressure and temperature data at your fingertips.”

Lindsay noted that by using their own technology, “we’ve taken out a potential source of integration issues and the complexity of mixing vendors because we’ve designed a fit-for-purpose retrofit system, which will allow us to quickly and efficiently deploy the SonicGauge technology in existing assets."

The gauge hanger is the key to SonicGauge’s flexibility, since it can be installed anywhere in the wellbore, it enables the operator to monitor a zone that was not originally planned for in the initial completion, thus improving the quality of the data.

“The system is set by our own electro-mechanical setting tool, which means the systems are not reliant on explosives or hydraulics in order to set the gauge hanger, which makes installation quicker, easier and more reliable.”

Lindsay also noted: “The other thing that the high expansion gauge hanger allows is the ability to monitor multiple zones or pressure gradients” of a well via a single SonicGauge system. “Alternatively, we can install it in multiple legs of a multilateral or maximum reservoir contact well. That way, we can join up all the legs of a multilateral and deliver to the surface using the one system rather than getting tied up in knots with other cables and things or, as we mentioned, if there’s an existing system where something’s failed we can top it up or replace it.”

SonicGauge can be digitally as well as physically retrofitted into a field’s existing infrastructure. “What we have is the ability to hook into third-party surface systems such as remote terminal units, or the ability to transmit using mobile phone technology direct into a customer’s database or, if we want to go really old school, have someone physically collecting SD memory cards from the field every so often,” Lindsay said.

However, Acoustic Data believes that SonicGauge works better on more than just a well-by-well basis. “The real benefit is being able to install this type of system on a field-scale,” Lindsay said.

“What we’re looking at is field-scale well-to-desktop production improvement, that type of approach where we can make a significant financial impact to the oil company or the operator across a large area for a long period of time.

“Because our system is designed for long-term use,” he continued, “by shrinking everything down and being honed to the point of no extraneous pieces in the system, we’re able to manage the power requirements extremely well, so under the right conditions, the gauges can stay downhole for five, six, seven years, so that means we have the ability to monitor and provide daily data which is useable for making informed reservoir decisions across a field.”

“The plug and play, ease of use is a key thing as well,” Lindsay said. “It means we can install equipment, as in the case of one of our larger projects on jackets, where maybe a traditional method might have required a larger intervention campaign or equipment.

“We can install it slightly more cost-effectively from the operator’s perspective and the value that we bring is high, so the effective cost to the operator is minimal.”

The power source for a SonicGauge monitor is two double C cells. “The whole system downhole runs on something that’s inherently tiny,” said Lindsay, “just a couple of batteries for up to seven years of real-time data.

“So the power requirement is absolutely milli-milliwatts in some cases. Obviously as you get to higher temperatures, the battery life can be slightly lower, but in general, we’re looking at long-term power of only a few milliwatts here and there, so it’s very efficient.”

By using the gauge hanger system, a SonicGauge system can be easily retrieved once the onboard batteries are depleted. This ease of access helps decrease operator maintenance costs as well.

A key cost-saving advantage of the SonicGauge is that it is able to reduce the intervention cost versus some other systems on the market.

“If you’re looking at some of the onshore markets in Europe,” said Lindsay, “that type of intervention might cost you about 50,000 euros [US$58,500] and if you take that over the course of years, you’re looking at a very low cost of ownership in terms of the operating expense for the workover.” 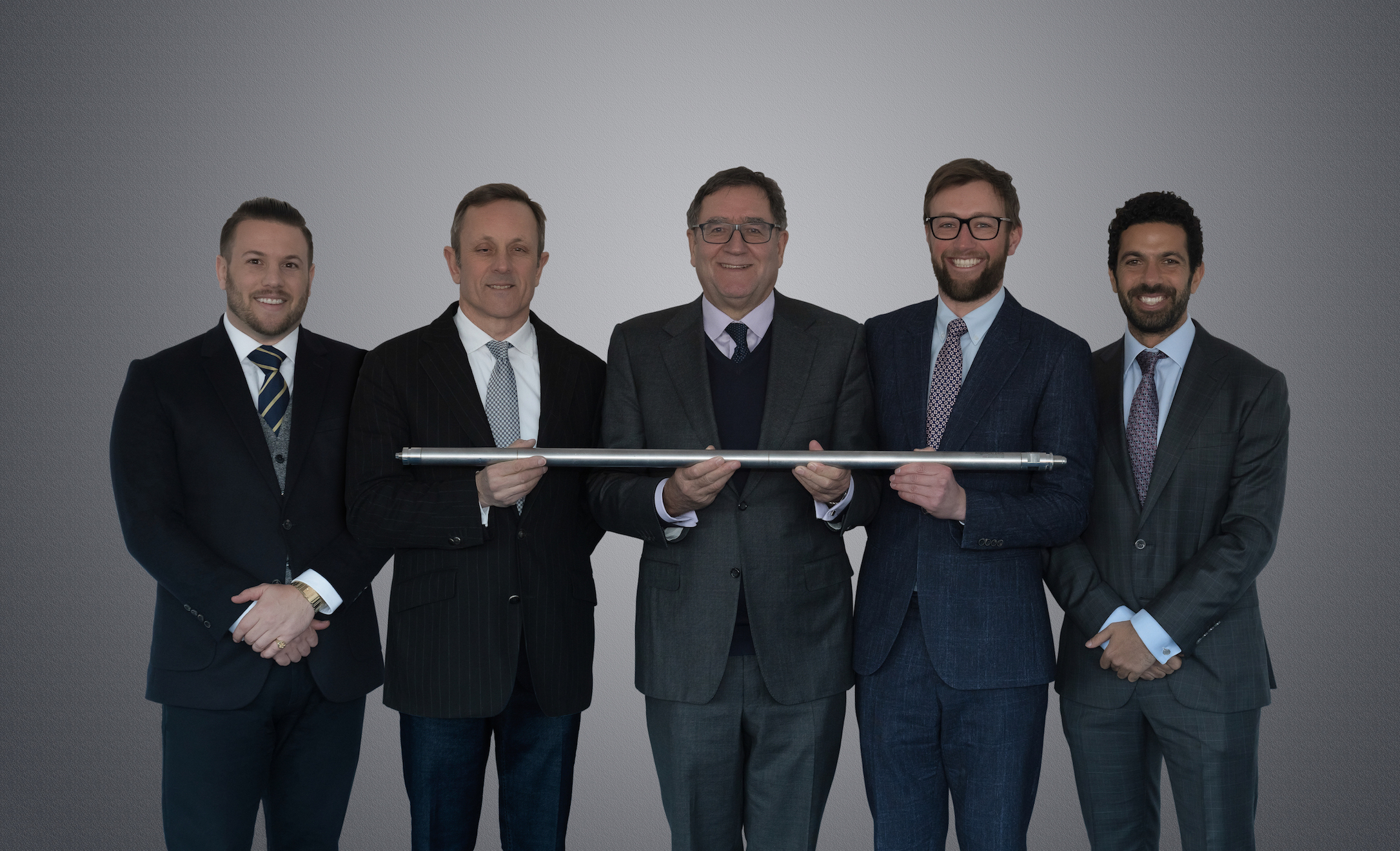 In April of this year, the company closed an US$8 million investment from London-based growth capital investor Energy Growth Momentum (EGM).

Acoustic Data intends to use the funds to scale up operations and grow its team in order to capitalise on increased demand for its proprietary wireless downhole pressure and temperature gauge system.

“The things that we’re focusing on right now are the foundations and fundamental building blocks of the business, in terms of infrastructure and personnel,” said Tolley. “We already have a technology that works and it’s really just about growing our customer base and scaling the technology at this point.”

In addition, Acoustic Data has used this investment to open their new 350-square metre Technology Centre and headquarters in Woking, UK, signalling their strong ambitions to disrupt the oil sector.

“Our new technology centre will expand our R&D for new product lines and manufacturing capabilities,” said Tolley, “to meet the sort of scale that we are seeing from NOCs and our current IOC project, we need to capitalise on these opportunities as soon as they present themselves.”

“We’re about to start a major project in APAC right now,” said Lindsay, “and we’re looking at collaborating with a few other partners globally to introduce these types of wireless solutions, so it’s an exciting time, and I think it shows a shift in the way people are viewing the need for information that they can act upon.

“I think the good thing for us is that this technology is something that’s applicable for smaller companies through to national oil companies [NOCs].”

“Everybody needs to get the most out of their reservoirs and any gloom in production that we can help offset by giving more information to help make these management decisions, that’s really the why and wherefore of our company.”